Stan VanDerBeek was a pioneer in the development of experimental film and live-action animation techniques and a visionary of avant-garde and expanded cinema. Advocating a utopian fusion of art and technology, he produced theatrical multimedia experiments that included projection systems, dance, planetarium events and the exploration of early computer graphics and image-processing systems. He studied at Cooper Union and Black Mountain College, and was awarded an honorary doctorate from Cooper Union in 1972. He was artist-in-residence at WGBH and the University of South Florida, and Professor of Art at the University of Maryland, Baltimore. His work was the subject of retrospectives at the Museum of Modern Art and the Whitney Museum of American Art in New York. VanDerBeek was also intimately involved with the artists and art movements of his time: he filmed happenings and merged dance with films and videos. VanDerBeek was a pre-eminent thinker, scientist, artist and inventor who forged new links between art, technology, perception and humankind. In 1966, he wrote a visionary manifesto about man losing his way in his place on earth and the power of artists to rectify the course.

In his film Poemfield No. 3 (1967) geometric groupings of monochrome patterns and words are created with the movie program BELFLIX, which was developed in the 1960s by Bell Telephone Laboratories programmer Kenneth Knowlton. The films were created via a complex process: an IBM 7094 was fed instructions for BELFLIX to translate into a programming language. The code was transferred onto punch cards to be read by a computer that assembled a picture and recorded it to tape. Although this film is one of the first known artworks ever made using a computer, it was initially filmed on 16mm and hand-coloured by VanDerBeek. 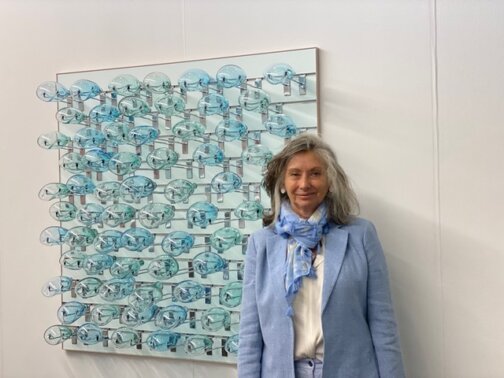