Ahead of the imminent release of our new publication Invites Vol.2, marking 50 Invites exhibitions since the series began in 2012, we’re delighted to share some exclusive material from our archives and from the artists. Each fortnight we will be focussing on one Invites alumni, giving access to interviews, installation views, and links to recent and upcoming projects. Also check out the Zabludowicz Collection Instagram for some gems from artists’ back-catalogues and some behind-the-scenes work in progress.

“The topography of London, Heritage, identity and materiality are the institutions that I’m interested in looking at within my work. I position myself into a socio-political awareness within these systems in order to create conversations that defect against their histories. I don’t believe in the hierarchical approach of materials (or I insist on ignoring them). I work within the context of the found, each inquiry is a phase of a larger conceptual idea.” Tamu Nkiwane, 2019

Tamu Nkiwane (London, England, 1990) is a London-based artist whose work examines his surrounding environment and considers the way value – as a fiscal and cultural consideration – is accumulated and transferred within it.

A mode of autobiographical research underpins his projects, be that a focus on the detritus of urban streets of his home town of London or the unfamiliar surroundings of his extended family in Zimbabwe.

His Invites exhibition (8 November–16 December 2018) was entitled Blue Plastic and was an immersive installation centered around a market stall, both a metaphor for Zimbabwe’s weak economy and for Nkiwane’s ongoing negotiation of his own cultural identity in relation to the country’s history. As part of the installation Tamu produced a deeply personal zine discussing his journey, you can download that on the right hand side of this page along with the original interview he did with Invites curator Paul Luckraft. The soundtrack for Blue Plastic was released on Invisible Animals, an Independent cassette based music label run by artist Yrii Samoilove (@ysamoilove). A performance at the White Crypt took place as part of his Invites show and music has taken an ever larger space in Tamu’s practice as it evolves.

After making Blue Plastic Nkiwane was invited to take part in ICA’s Beyond the Voyage where he read and performed a poem about multiculturalism in the UK entitled stop after orange (you can find it in the image gallery below and the ICA booklet is available in downloads). He also participated in 12th Kaunas Biennial, Lithuania, his work for that, entitled Green River continued his exploration of this dichotomy and included further thinking about the global situation in relation to Eastern Europe and political, economic and social correlations between Russia and Africa. We have a selection of exclusive images from this exhibition on the gallery below. You can read more about Tamu’s participation here (it’s in Lithuanian, so google translate might come in handy for some).

Both Blue Plastic and Green River focused on belief systems, for Green River paganism depicted via what Tamu calls ‘modenist vodoo’ of ill favour brought on by the presence of objects from contemporary life such as radio towers or mobile phone transmitters. This interest in ways of living and communicating beyond the physical body led him to create Apocrypha, a film commission for BBC Arts New Creatives, co-funded by Arts Council England. Apocrypha presents a conversation about heritage and spiritualism between Nkiwane and a Sangoma (South African spiritualist), who lives and works in a barber shop in Walthamstow. As such it continues his research and thinking around the formation of diasporic identities. This work was screened in January as part of No Fact of Blackness, the 17th London Short Film Festival and also at the ICA in February 2020 as part of Current Transmissions, a four-day showcase presenting new works in audio, moving image and interactive media from London-based emerging artists. We are thrilled to host the full set on soundcloud. Click here to hear the full set performed at the ICA as part of Transmissions IV: SERF featuring Tamu on Keyboard, Radio and guitar with Mohammed Rowe (@rowe.mohammed on Guitar EFX), Jazbo von Magius Gross (@jazbos on TV screen and EFX) and Nicola Tirabasso (@visio_ (drums EFX). Nkiwane also performed at the 5 year anniversary of Artagon in Paris where he performed a two hour durational piece titled Event Horizon. In this performance he focused on cycles, structures and blackholes as a topic, with sounds from Saturn being heard as he performed.

Tamu has been busy during lockdown - as well as setting up a music studio in his bathroom and starting work on a documentary about the underground economies of London’s vagrant communities - he has launched Cabin an old skool online collaborative project initiated in the first days of quarantine. Cabin takes its influences from the hay day of the internet, before it became a corporate tool, the aesthetic is purposefully archaic and paired with the anarchistic authorless approach, continues Tamu’s interest in anti-hierarchical organisations and alternative structures.

Nkiwane is currently the first recipient of the SPACE Ilford Patrons & Friends Studio Bursary. An award which includes a free studio from a year and mentoring and other professional development opportunities. This month he running a lockdown zine making workshop for 30 UNICEF Child Friendly Redbridge Ambassadors, aged 11-16yrs and who represent each secondary school in Redbridge.

Alongside that we are hosting some exclusive material including images of his work in the 12th Kaunas Biennial, a new drawing Sleeper, made between hand and computer, a list of things to watch online to keep us inspired – see list and links below – as well a generous and diverse Spotify playlist, taking in Mos Def and CAN and many other eclectic and dream filled sounds.

Tamu Nkiwane b. 1990, London. Lives and works in London.
Nkiwane holds an MA in Painting from the Royal College of Art, London, and a BA (Hons) in Fine Art (Sound Art module) from Middlesex University. 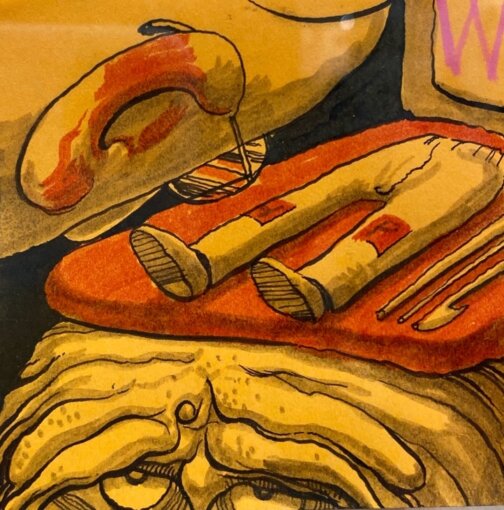