Spaces of Distribution and Production

FRIDAY 6–SUNDAY 8 JULY
THE SUMMER SESSIONS:
SPACES OF DISTRIBUTION AND PRODUCTION
This session considers the spaces in which commodities, images, truth claims and architectures are produced and distributed. Five artists' work contributes to this discussion: Walead Beshty's objects testify to their movement through space, and give form to invisible systems of distribution. Ethan Breckenridge contains corporate architecture of the everyday in tinted glass vitrines. Helene Kazan explores the use of masking tape on windows as protection against exterior force, from natural catastrophe and human conflict. Shi Jin's diminutive karaoke machines reference the mobile business models invented on the margins of global financial systems. Caragh Thuring's paintings depict the industrial paradigm's breakdown as formal elements abstracted from their usual contexts: floating cranes and giants pulleys displaced across raw canvases.

Friday, 6pm
PRESENTATION BY HELENE KAZAN
FOLLOWED BY A READING GROUP AND DINNER

Helene Kazan will screen her work Masking Tape Intervention: Lebanon 1989, a film she made using a single photograph of a kitchen in Lebanon during the civil war. This film is the starting point for her commissioned work for this exhibition, Window no.17 (2012), and Kazan will use it to introduce the research she conducted as part of this project. She has used three different protective patterns of masking tape from a spectrum of historical photographs to conduct a physical material experiment, testing their functionality when faced with violent force. Kazan will show footage from her experiment as part of her presentation, which will be followed by a Q&A with the curator.

For the reading group, a brief introduction to each of four texts circulated in advance by the curator will be followed by an open discussion about how (if) these relate to spaces of distribution and production. The artists, the speakers, and the curator's own research proposed texts that link tenuously to the exhibition and the work in it, hopefully in way that is productive of debate.

We will read several pages from Eyal Weizman's new book, The Least of All Possible Evils, as well as the first section of Hannah Arendt's classic text, On Violence. There is also a short story of representational space, “Cathedral" by Raymond Carver, and a conversation on representation and power between Natascha Sadr Haghighian and Ashley Hunt, “Representations of the Erased".


Saturday, 3pm
GUEST LECTURE BY ANTHONY DOWNEY
TALK BY NATASHA MARIE LLORENS FOLLOWED BY TEA
[THIS EVENT HAS BEEN CANCELLED]

Sunday, 3pm
PERFORMANCES PRODUCED BY ETHAN BRECKENRIDGE AND CARAGH THURING, Q&A WITH THE CURATOR.
FOLLOWED BY DISCUSSION AND TEA

Ethan Breckenridge will have four actors performing a teleplay around five of his works installed in Troubling Space. The script (adapted from J.G. Ballard's novel Super-Cannes is set around a parked car and swimming pool documenting the protagonists' first arrival in the hyper-classed space of a gated community and corporate business park in the South of France. In different ways, Breckenridge's sculptures and adaptation interrogate the double nature of banter – both formal and linguistic – and the spaces such seeming banality produces.

Caragh Thuring has culled a number of texts from different journalist and literary sources that speak to the five paintings included in this exhibition. An actor has been engaged do a theatrical reading of these excerpts in place of a more traditional artists' talk. In this way, Thuring allows context to re-emerge and frame the paintings, but without limiting the work to one statement emanating from the artist.

The Sessions promote two levels of engagement: open events include artists' performances and guest lectures or conversations between academics and artists on Saturday and Sunday afternoons. For those who wish to engage more deeply, the general public is invited to RSVP to take part in a series of small discussions on Friday and Sunday evenings.
All events are FREE 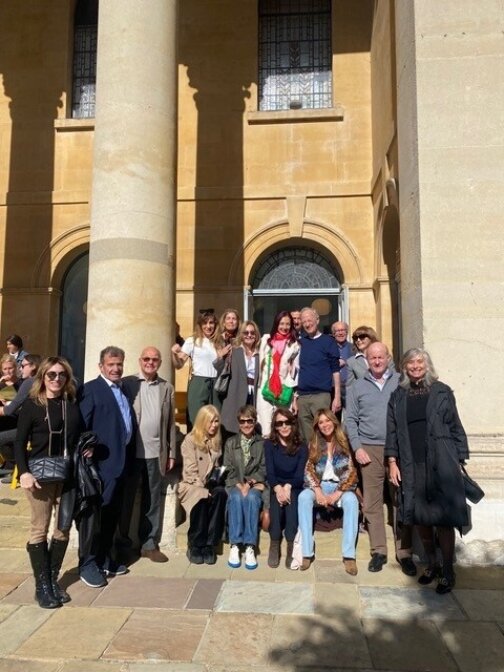